Getting rid of low contrast keypoints

Key points generated in the previous step produce a lot of key points. Some of them lie along an edge, or they don't have enough contrast. In both cases, they are not useful as features. So we get rid of them. The approach is similar to the one used in the Harris Corner Detector for removing edge features. For low contrast features, we simply check their intensities.

This is simple. If the magnitude of the intensity (i.e., without sign) at the current pixel in the DoG image (that is being checked for minima/maxima) is less than a certain value, it is rejected.

Corners are great keypoints. So we want just corners. If both gradients are big enough, we let it pass as a key point. Otherwise, it is rejected.

Mathematically, this is achieved by the Hessian Matrix. Using this matrix, you can easily check if a point is a corner or not.

If you're interested in the math, first check the posts on the Harris corner detector. A lot of the same math used used in SIFT. In the Harris Corner Detector, two eigenvalues are calculated. In SIFT, efficiency is increased by just calculating the ratio of these two eigenvalues. You never need to calculate the actual eigenvalues.

Here's a visual example of what happens in this step: 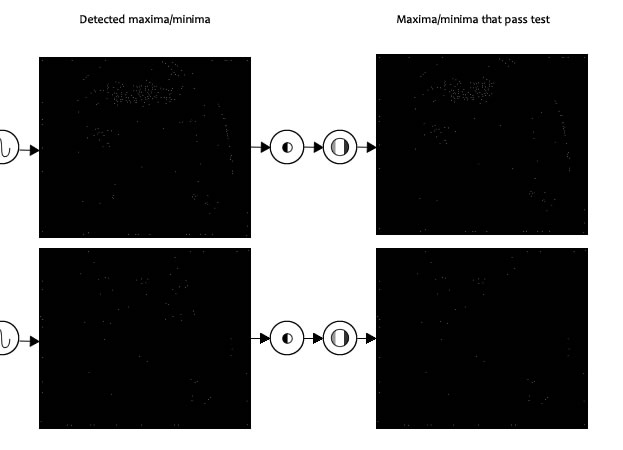 Both extrema images go through the two tests: the contrast test and the edge test. They reject a few keypoints (sometimes a lot) and thus, we're left with a lower number of keypoints to deal with.

In this step, the number of keypoints was reduced. This helps increase efficiency and also the robustness of the algorithm. Keypoints are rejected if they had a low contrast or if they were located on an edge.

In the next step we'll assign an orientation to all the keypoints that passed both tests.